Original singer & songwriter, brilliant and unmistakable guitarist. Besides folk, also chanson and blues elements mingle in his music. In the second half of 80's, or in the golden age of the Porta festival with more than 30 thousands visitors, he stood out among the sonwriting elite of that time - especially with his songs "Blues o hvězdě" [Blues About A Star] and "Křídla a kopyta" [Wings And Hooves] (Porta author's prizes in 1986 and 1988), "A ještě radši se vracím" [And Even More I Love to Return], "Šašek" [Jester] and other songs. Petr's deep and captivating voice is unmistakable. Perhaps only the voice of his brother could cause a mistake - actor Pavel Rímský, who's known from movies dubbing, from the radio or the Vinohrady Theatre and other stages. 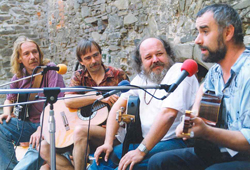 Petr was a producer of the FOLKY – NEFOLKY music festival, which took place in the castles Helfštýn and Boskovice for many years and which is being remembered up to now, and also of the First International Roma Festival and its three CDs.

Gallant to girls and women, eternal rebel against all knaves – especially the political ones, excellent driver and able computer technology user, imaginative cook, both tragedian and joker. He hasn't become reconciled with the state division, and he's convinced that - in addition to the whole federal parliament - the present president Klaus should be in jail for this. Petr Rímský was born in Kolín, today we could say in an international family – his father, stage director Pavel Rímský, was a Slovakian.